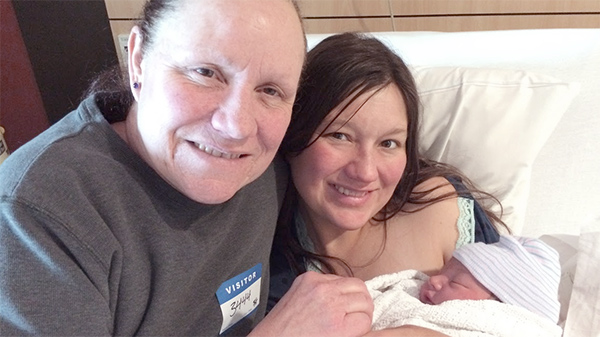 Let me tell you about this little guy and how he decided to enter the world! On March 5th, which is also Dave and my anniversary, my newest grand baby Brecken was born. My sister Sharon and I had left for my daughter Jennifer and my son in law Lucas’s house as we were anxiously awaiting the birth of my new grand baby. We arrived on Thursday March 3rd. My daughter was due on March 2nd and she really wanted this baby to come and meet the world, but he had other ideas.

After a night of impatience, and a lovely dinner at a local Italian place. Where by the way, as we were all sitting around the table, my sister gets a facetime call from her son and daughter-in-law, Stephen and Ashley. They were announcing the gender of their new to be baby. It’s going to be a baby girl they said! We all were so happy for them, A few tears were shed.

No baby was to be born that night. The next day went rather quickly, ending in a delicious honey chicken dinner and apple rosettes for desert. We all were tired and went to bed. At around midnight Lucas comes and wakes me up, he said my daughter needed me in the bathroom. So in I go all sleepy eyed, only 2 hours of sleep, ( and believe me Grandma needs her sleep! )

Jennifer was sitting on the toilet and in a lot of pain, I timed her contractions at 1 minute apart, all the while Lucas was packing the car for the trip to the hospital. By this time my sister had joined us in the bathroom. I then timed the contractions at 30 seconds apart! Yikes! I yelled for Lucas to dial 911 because baby was not going to wait. He’s like, I have the car already packed, let’s go to the hospital.! Uh, Im going, dial 911 I can feel the baby’s head coming! He’s like, what? And then it hit him, he was Johnny on the spot and dialed 911, and was talking to dispatch. All the while I can see the fear in my daughter’s eyes! And somehow I knew we needed to act and act now! I tried to get Jennifer to bed, but, like the usual housewife, said no, I don’t want to get the bed all dirty, get some towels! Not the nice ones, the old ones! Sharon raced to get towels! By the way Sharon had the sense to film this and tack pics while standing in the bath tub! Dispatch said the paramedics are on their way, so hang in there. Well, as you can probably guess, baby was not waiting, so I grabbed a towel and my daughter gave a BIG push and out popped baby right into Grandmas arms!

Jennifer immediately wrapped him in her arms and said we had a baby boy! They kept this a surprise, so what a surprise it was, they already had 2 precious little girls and really wanted a little guy to make their nest complete. I will always remember looking up at Lucas as he said, “we had a baby in the bathroom!” He looked so happy! Dispatch told us to tie the cord, so Lucas rushed to get a shoelace, I tied it, just as Dispatch said, “don’t tie it too tight!”, Im like, ok what is too tight? We could hear the sirens approaching and Sharon went out to meet them all. A huge ladder truck and ambulance, all for a little baby boy named Brecken Edward Green. Ok, you have to picture this next scene, where the girls Baylee and Rylee had been sitting on the bed outside the bathroom where they witnessed their baby brother being born. After the paramedics let daddy cut the cord you could tell both girls were a little scared. But just then a very kind fireman carried their baby brother over for them to meet him. They were so excited to have a new baby brother, and each got to hold him briefly, such a beautiful moment to experience.

The paramedics helped my daughter to the ambulance where they delivered the placenta and prepared to take daddy, mom and baby to the hospital. I was elected to drive my sister, Baylee and Rylee to the hospital. Let me tell you I have never met a more direct little back seat driver than Baylee. She’s like, Grandma you are driving crazy! Don’t take the corners so fast she said to me! I laughed so hard I cried all the way to the hospital. Sharon gabbed one girl and I the other and off we went to check on Mom and baby. The whole way through the emergency room, its like we were stars or something coming down the red carpet. Everyone seemed to know who we were and where we needed to go, as they assisted us along the way to the hospital room.

We arrived and found Mom and baby doing well, and getting some well needed attention. We were joined by Grandma Karen and Grandpa Jim, where they anxiously met the little guy named Brecken, 7 lbs, 14oz, 21 inches long, just a little peanut!

And that’s my story, what Grandma gets to deliver her own daughter’s baby, while sharing this whole wonderful experience with daddy Lucas, granddaughters Baylee, Rylee, and a super bonus with her sister Sharon. All I can say is wow! Welcome little man Brecken Edward Green!