When designing lightweight saddles for women we pay close attention to the differences in the pelvic girdle of a women compared to that of a man. The seat for a women’s horseback riding saddle has to be designed differently than a seat made for a man or she will not be comfortable.

The distance between a woman’s seatbones is generally between 4 to 6.5 inches. (a) A man’s will measure between 3.5 to 4.75 inches. Most mass produced saddles are designed by men for men and this is rarely taken into consideration. One of the measurements we require from the rider is the distance between their seat bones. Trail saddles for women should have a finished seat that has wide enough support for her pelvis. Also, saddles for women should have a seat that is slightly shifted forwards as a women’s seat bones usually contact the seat of a saddle slightly farther forward than a man’s which also affects where we start to sculpt out the seat for the thigh to lay. 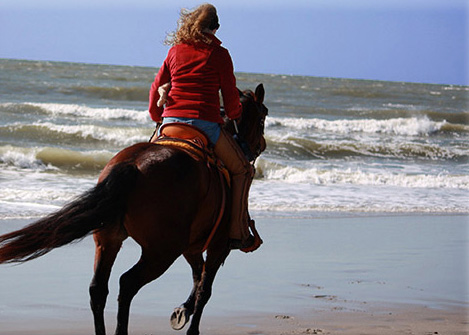 Another difference is the angle at which the thigh bones leave the pelvis. (b) Men’s legs can comfortably hang down straighter from the saddle whereas a women’s usually need to angle forward a little more. These differences affect how we shape the seat where the thigh passes between the base of the cantle and the pommel on custom saddles for women.

The last main difference is a woman’s pubic arch at the front of the pelvis is much lower than a man’s. (c) Unless specifically instructed by a customer we put the least possible rise in the seat from the back to the front as possible to give the female horseback rider more clearance. When all is said and done this attention to detail results in superb fit and unparalleled comfort for the woman horseback rider as well as the man.